In a small village near Manzala, the northeastern Egyptian town on the Nile Delta near Port Said, a few miles from the ancient ruins at Tanis. And over Manzala Lake, the largest of the northern deltaic lakes of Egypt; a promising kid was growing up tirelessly saturated with the elixir of a countryside extraordinary and singularity atmosphere, natively constructing an artistic character visually and conceptually sophisticated out of nature ingenuity. A kid who born to become one of the most known painters of his generation and a loving citizen who's thrilled by improving his country's culture image as well as properly presenting his contemporary art scene. More: an interview with the Artist by the national channel Nile.TV, March 11, 2014 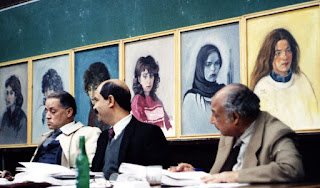 Ibrahim Ghazala (born 9 January, 1960) is an Egyptian visual artist, painter, Art professor and writer. Currently working in the position of Fine Art Professor, teaches drawing and painting in the painting department of the faculty of Fine Arts at Minya University in Egypt. He is professionally practicing painting since 1984, right after he graduated from faculty of Fine Arts, Helwan University in Cairo. Specifically he’s working on a long research project which curated his current visual concept of the landscape painting. Through his academic researches, he negotiated the aesthetics of the untouched nature philosophy, assets and liabilities, the question of the great creator “God” always present on his statement of Art. And the relation of those notions/open questions from the aspects of both: the socially constructed ordinary man’s vision through politics, religion and gender, as well as the proper vision he defines of the extraordinary one “the Artist”.

Basically, Ghazala’s technique in painting developed through his academic research progress, besides his exceptionally artistic character. He started an interest of studying the history of “Fayum Portraits” through his Master research in the early 90’s, which led him gradually to the philosophic debate of the relationship between nature and mankind. A personality of an artist – who’s born in a countryside nature, provided Ghazala the native knowledge of the Great creator’s existence. Ghazala always defines great God as the first Artist of all who decided to create most of his assets for aesthetic purposes. “When we look around, we could recognize how many things God created which are fitting for consumption in comparison of others which are not, for instance, how many plants are there which we could eat comparing with those many flowers which have long been admired and used for aesthetic and romance purposes” Ghazala said. Ghazala understands his deep interest of landscape art with the amount of nostalgia he is taking out of it.

Through the 90’s, Ghazala showed an interest in the technique of pointillism through his landscape painting series. The use of that specific technique has great impact on his practice; he explains why regarding to how visually it affects the color; which is the most important element on any painting. He also prefers the use of oil painting on canvases, usually depending on sketches where he is taking from the heart of nature, using different materials: (pens, coal, watercolors, pastels etc.). This is the initial start for a new piece, and then comes the most important part of his process where he collects his most desirable angels and he begins to plan a composition. Ghazala’s saying that the decision of choosing materials to use or even the angels of the composition comes to him by intuition, where he believes the real artist soul reliefs and lays. Ghazala believes that the composition is the birth of every new painting he creates, although it may take months to present. In 1998, Ghazala possessed his PhD with a Thesis entitles with: “Landscape Art of Der Blaue Reiter movement as an entrance to Abstract Art”. And he starts his post-doctoral researches on the Art of landscape ever since. 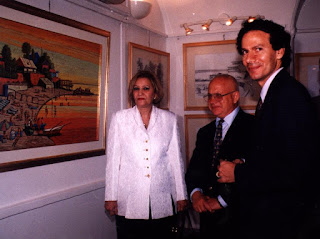 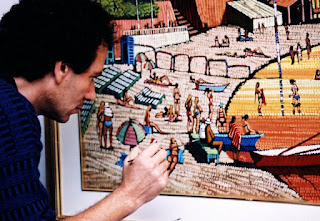 His experience in writing about the Egyptian visual Art scene of Cairo started by initiating Al-khayal Art magazine in April 2010 where he was holding “Editor in chief” position of the most of its more than 60 editions. This was an extremely important and intensive period of time in the artist life, he was concentrating in producing, editing and directing team of writers for an Art magazine that was funded by the Egyptian ministry of culture - which made it affordable and reachable for all and eliminates the central tendency of the capital’s culture and Art. “Honestly, I was jealous every time I happen to be abroad and see how the Art scene could be expressed through Art magazines - written by experts, even before I step into the town’s Art outlets (Galleries, museums, etc.), a thing that – in the case of Egypt - was suffering real need because of the shortage of national Art magazines.” He said. 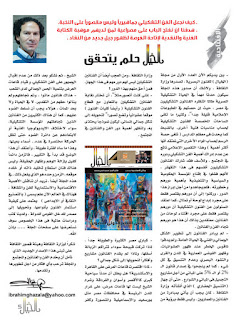 Al-khayal Art magazine mainly reviewed Cairo’s national and international Art events, especially the cultural exchanging events between Egypt and other foreign countries. Indefatigably, Ghazala also initiated an art event in the response of that aim; Luxor international painting symposium which he possessed the role of its general commissioner for its nine periods, inviting international groups of Artists and attracts other Art professors with their students to visit the historical villages of upper Egypt. Parallel to both initiatives; Ghazala organized and moderated a series of Art residences outside of Egypt where faithfully he was mentally occupied with gathering materials for the magazine. Those series was entitled with the name of the country followed by (in Egyptian eyes). Same was the approach of all his visits abroad; (Philippines, Romania, Ukraine, India, Tunisia, Algeria, Bosnia, Serbia, Yugoslavia, Yemen, Jordan, turkey among others). 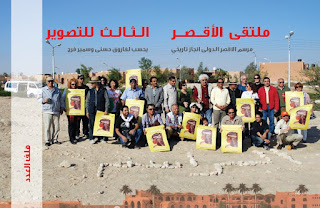 All these promising initiatives only prove a true life responsibility Ghazala is carrying for improving his country’s Art scene. The magazine issues were mainly covering events reviews, general Art topics besides a large number of exclusive newly taken images for every edition. Ghazala believes that good Art magazine should be rich visually; also he was persuading emerging writers and Art critics to raise their voices through a new generation of cultured Artists who can write and read in Art while producing and practicing it. For that specific project - which stopped recently, Ghazala still looking forward similar initiatives which could continue the responsibility of publishing national Art magazines of the Egyptian Art scene, although he’s still busy with the idea which took an extremely important layer on his researches and Art works.
Email ThisBlogThis!Share to TwitterShare to FacebookShare to Pinterest
Newer Post Home